by the GRWC Student Interns…

Banana slugs are probably one of the strangest animals in the forest. I remember when I was about six years old camping at Hendy Woods campground near Fort Bragg. I picked up a banana slug and played with it for maybe five minutes, and then my parents spent the next 20 minutes trying to scrub all the slime off my hands.

They got their name because they, of course, look like a banana. They are a range of yellow, from bright almost green to a dark yellow almost brown. They often have brown spots like an over ripened banana, but sometimes they are just yellow.

Banana slugs often live near water, especially small creeks. They need to do this because a large part of the water they need they absorb through their skin. They also get some water from the plants they eat. Banana slugs make and are completely covered in mucus, or slime, which is super important to their survival. Slime keeps banana slug skin moist, and is important for the slug to be able to breathe. On rainy or damp days, the banana slugs slime pulls moisture out of the air and on dry days slime pulls in water out of the soil.

If a banana slug is in an overly dry environment, or it’s just too hot out, they will die. Also because of how banana slugs get their moisture, if their water or habitat is contaminated with pollution, trash, or other unnatural substances, it can kill a slug. For these reasons it is very important to keep forest streams clean and flowing, or these important recyclers could become endangered or even extinct.

Nothing is softer or more flexible than water, yet nothing can resist it.
~Lao-Tzu

Water is the driving force of all nature.
~Leonardo da Vinci 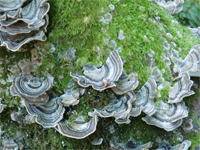 Back to Blog Home
Back to Watershed Council Website